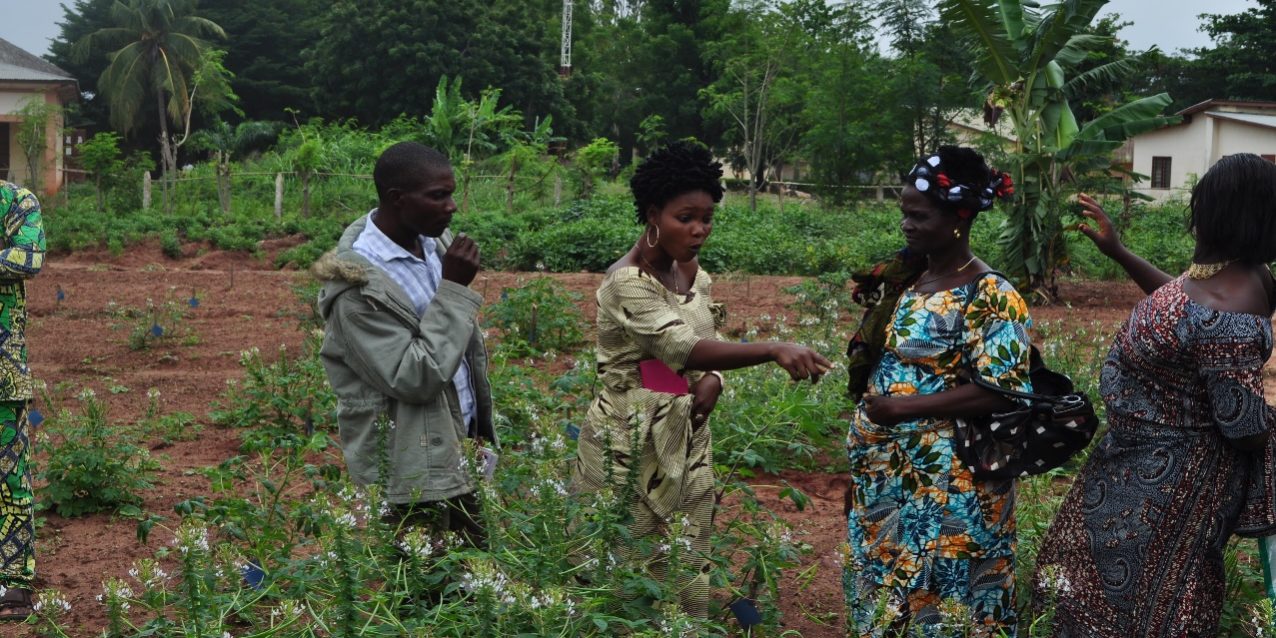 Spider plant is a traditional leafy vegetable with a great potential for improving health and nutrition in Africa. The project aims to develop high-yielding and nutrient-rich spider plant cultivars considering the expectations of farmers and consumers in Benin and Kenya. The project specifically addresses three research questions : 1-How can the diversity of spider plant be used to improve its yield, nutritional value and resistance to drought?, 2-What are the adequate cultivation practices for optimal and sustainable production of the species? and 3-How can researchers and value chain stakeholders efficiently collaborate for successful impact of the breeding program?

A germplasm of accessions was established and exploited in a genome-assisted breeding approach which involved the users of the species of Benin and Kenya. Traditional knowledge related to use and management of the species was documented in both countries and integrated into production and promotion strategies. Experiments were conducted to establish the best agricultural practices for the species and phenotypic and metabolomics characterization were done in controlled conditions. Spider plant genotypes were re-sequenced to facilitate molecular breeding strategies. New adapted cultivars will be created and technologies to grow and distribute them effectively will be developed to improve access to healthy diet.

In Benin, spider plant was known by several rural communities as a medicinal and food plant. The Adja communities in the southern region of the country use to cultivate and sell the species in their local markets. However, in urban areas the species was less known. With the project, 20 farmers in urban and peri-urban areas started cultivating the spider plant and the demand in the species is increasing. In addition, it is now included in the diet of more than 200 urban households which are part of the Community-Supported Agriculture system established by the NGO Hortitechs Developpement and a network of farmers. Some local food enterprises including Agridynamic and Sahel Ltd. are interested in processing the leaves. There is a growing demand in spider plant in urban areas. More people are aware of the nutritional and medicinal qualities of the plant and integrate it into their eating habits.

Association between vitamin content, plant morphology and geographical origin in a worldwide collection of the orphan crop Gynandropsis gynandra (Cleomaceae)

The project was conducted by researchers from the Biosystematics Group of Wageningen University, the Faculty of Agronomic Sciences of the University of Abomey-Calavi (FSA/UAC), the African Orphan Crops Consortium (AOCC),the World Vegetable Center, as well as farmers and consumers in Benin and Kenya, respectively, collaborating with the NGO Hortitechs Developpement and the Kenyan Resource Centre for Indigenous Knowledge (KENRIK). Beyond the project, project members at FSA and AOCC contributed to setting up the African training and research mobility program MoBreed focused on African orphan crops breeding with two MSc and two PhD students conducting their research on spider plant breeding. During the first African Plant Breeders Association Conference held in Accra (Ghana) from October 23th to 25th,, 2019, a communication was made on the topic “Omics-assisted breeding for nutritional value in the orphan vegetable spider plant [Gynandropsis gynandra L. (Briq)]” by Deedi Sogbohossou, PhD student at Wageningen University and funded by the project. Carlos Houdegbe, PhD student and Jelila Blalogoe, former MSc student, both of MoBreed at the University of KwaZulu-Natal in South Africa presented a poster on “Quantitative analysis of leaf yield and related traits in Gynandropsis gynandra” and “Germination and dormancy in seeds of five Gynandropsis gynandra genotypes and their crosses”, respectively.

The project is based on a multi-stakeholders approach for knowledge generation and dissemination. End-users of developed spider plant cultivars including farmers, consumers and vendors were involved at the early stages of the project and actively participated to the definition of the product target (high-yielding and late flowering cultivars with regrowth capacity after cutting). During germplasm characterization, farmers and consumers were invited to assess the variability observed on-farm and re-define breeding objectives. At that step they also put emphasis on other criteria related to taste and odour of the leaves. Farmers are actively working for promotion of the species in urban and peri-urban vegetable production in Benin and Kenya. Results obtained from various research activities have been published. Other research projects are on-going, including quantitative analysis of leaf yield and related traits for speeding up improved cultivars development in multiple environments, and understanding quantitative traits underlying pigmentation and trichomes density in the species.