Improving the plants that Africans eat and breeders neglect 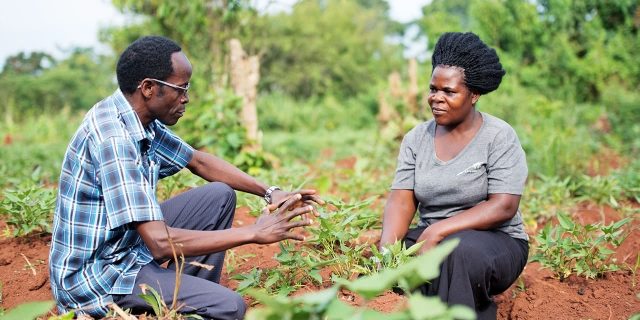 Nutrition and genetics in Africa

CASSAVA and sweet potatoes. Lablab beans and water berries. Bitter gourds and sickle sennas. Elephant ears and African locusts. Some will be familiar to readers in rich countries. Others, probably not. Elephant ears, for example, are leafy vegetables. African locusts are tree-borne legumes. All, however, are standard fare in various parts of Africa. What they also have in common is that they are, from the point of view of plant breeders, orphans. They are neglected by breeders because they are not cash crops. Conversely, they are not cash crops because they are neglected by breeders.

That neglect matters. The cereals which dominate human diets—rice, wheat and maize—have had their yields and nutritional values boosted over the years by scientific breeding programmes. In the modern era of genomics, they have had their DNA scrutinised down to the level of individual base pairs, the molecular letters in which genetic information is written. They are as far removed, nutritionally, from their ancestors of as little as two centuries ago as those ancestors were from the wild plants which begat them. Orphan crops have yet to undergo such a genetic revolution.

Even for adults, a lack of calories and essential nutrients is harmful. For children it can be devastating. Poor childhood nutrition leads to stunting—inadequate bodily development, including the development of the brain. A report published by the World Health Organisation on November 16th suggests that almost a third of Africa’s children, nearly 60m of them, are stunted. And stunted children grow into adults unable to achieve their potential. Researchers at the World Bank reckon the effects of stunting have reduced Africa’s GDP by 9-10% from what it would otherwise be.

One way to reduce stunting would be to improve the crops that Africans, particularly those in the countryside, actually eat—in other words, orphan crops. Such improvement is the purpose of two recent, interrelated projects that are now getting into their strides. Both are based in Nairobi and are conducted under the auspices of the World Agroforestry Centre, an international non-governmental research organisation. One is the African Orphan Crops Consortium (AOCC). The other is the African Plant Breeding Academy. The AOCC’s task is to obtain complete sequences of the DNA of 101 neglected food crops. The academy’s is to disseminate those (and much else besides that relates to crop breeding) to young scientists from universities and other institutes around the continent, who visit Nairobi for the purpose.

The AOCC’s founding spirit is Howard-Yana Shapiro. Dr Shapiro’s day job is chief agricultural officer of Mars, a big American food and confectionery business. As part of that business, Mars’s scientists once sequenced the genome of cacao, the source of chocolate, in order to improve one of the firm’s most important raw materials. A chance meeting between Dr Shapiro and Ibrahim Mayaki, the head of an African development agency called NEPAD, planted in Dr Shapiro’s mind the idea that what was being done for cacao could equally be done for other tropical crops. The pair then recruited Tony Simons, who runs the World Agroforestry Centre, and Rita Mumm, a plant geneticist at the University of Illinois, and in 2013 this group launched both the consortium and the academy.

So far, the AOCC’s researchers have fully sequenced the genomes of ten of their targets. They have partially sequenced those of 27 others. Once full genomes are available, the differences between those of different natural varieties of the same species, known as landraces, can be identified. In particular, detailed sequencing enables maps of DNA markers within a genome to be made. These markers can then be used to chart the movement of blocks of DNA from parent to offspring when different landraces are crossed. This makes it much easier to find out what contributions particular bits of DNA are making to a plant, and thus speeds up the process of breeding new varieties that either have better yields (because of virus-, pest- or drought-resistance, for example) or better nutritional value (enhanced vitamin content, say), or both.

The academy, meanwhile, has, since its foundation, brought in 81 researchers from all parts of Africa for what are, in effect, masterclasses from the world’s top plant-breeding specialists. These include lectures on the consortium’s latest results, so that the visitors can begin to apply those results to their work.

Breeding and disseminating new crops is a long-winded business, but a DNA-based approach has already shown promise. One scientist who is embracing it is Robert Mwanga of the International Potato Centre. Dr Mwanga (pictured on the previous page, with a farmer) was an early proponent of the scientific improvement of African crops. His own work, for which he was awarded the World Food prize in 2016, is on sweet potatoes. The varieties of these root-tubers that were popular in Uganda, his native land, and other parts of Africa in the mid-1980s, when he began his studies, are deficient in vitamin A. A lack of this vitamin damages children’s eyesight and opens them to infection by such things as measles. This is a disease that can kill, and, if it does not, it can cause brain damage.

Starting with Asian varieties that had more vitamin A in them, Dr Mwanga bred a dozen strains that are vitamin-A rich and have more dry matter (and thus more calorific value) than African landraces. He then led a campaign to encourage local farmers to adopt his novelties—which they did.

Variety is life itself

Dr Mwanga is now working on virus resistance, for viral infection is a big problem with sweet potatoes. And where he has led, others hope to follow—only faster, because they will have better genetic information. Enoch Achigan-Dako, from the University of Abomey-Calavi, in Benin, has plans for amaranthus, cleome and egusi melons. Egusi seeds are rich in fat and protein, qualities Dr Achigan-Dako hopes to improve. The melons themselves are also disease-resistant, a property he hopes to transfer to watermelons, which are also an important crop in west Africa.

Julia Sibiya of the University of KwaZulu Natal, in Durban, meanwhile, is working on sorghum, another under-studied African crop. She is also working with Dr Achigan-Dako to set up MoBreed, a pan-African collaboration with the self-appointed task of improving ten orphan crops, including Kersting’s groundnut, the African custard apple and fonio, a type of millet.

Happiness Oselebe, another participant in MoBreed, is even more ambitious. Dr Oselebe works at Ebonyi State University in Nigeria. Not content with improving existing crops, she wants to create a new one by domesticating serendipity berries. These are wild vines that produce a protein 3,000 times as sweet as table sugar. That, she thinks, could be the starting-point not merely for something grown for local consumption, but of an industrial-scale cash crop. Samson Gwali of Uganda’s National Agricultural Research Organisation, yet another alumnus of the academy, plans to use AOCC’s data to improve the productivity and shorten the generation time of shea trees. The nuts of these trees are the main source of cooking oil for 80m people in 21 equatorial African countries stretching from Senegal to Ethiopia.

Breeding better crops is, though, only half the battle. Farmers have then to be encouraged to adopt them. And farmers are, for understandable reasons, resistant to change. That they can be induced to do so, though, is shown by Dr Mwanga’s experience. Unlike traditional African sweet-potato landraces, which are white, his improved varieties are orange because they contain beta-carotene, a molecule which is a precursor to vitamin A. To start with, many of Uganda’s sweet-potato farmers rejected the new cultivars for human consumption, thinking them good only for use as animal fodder. By patient persuasion, Dr Mwanga won them round. Recruiting seed companies is also important. In Uganda, Dr Mwanga is working with two local firms, BioCrops and Senai, to distribute the latest varieties of orange sweet potato.

At the moment, the focus of all this activity is very much on improving subsistence agriculture. But, as Dr Oselebe’s work suggests, the potential for something much bigger does exist. Though it is unlikely the imperial cereals will ever be pushed aside, demand in rich countries for new and exciting fruit and vegetables is a different matter. Bananas, mangoes, pineapples and pawpaws are all tropical fruit that have gone global. If some of Africa’s orphan crops, suitably improved by genetic knowledge, were to follow suit, the benefits to African farmers would be huge.