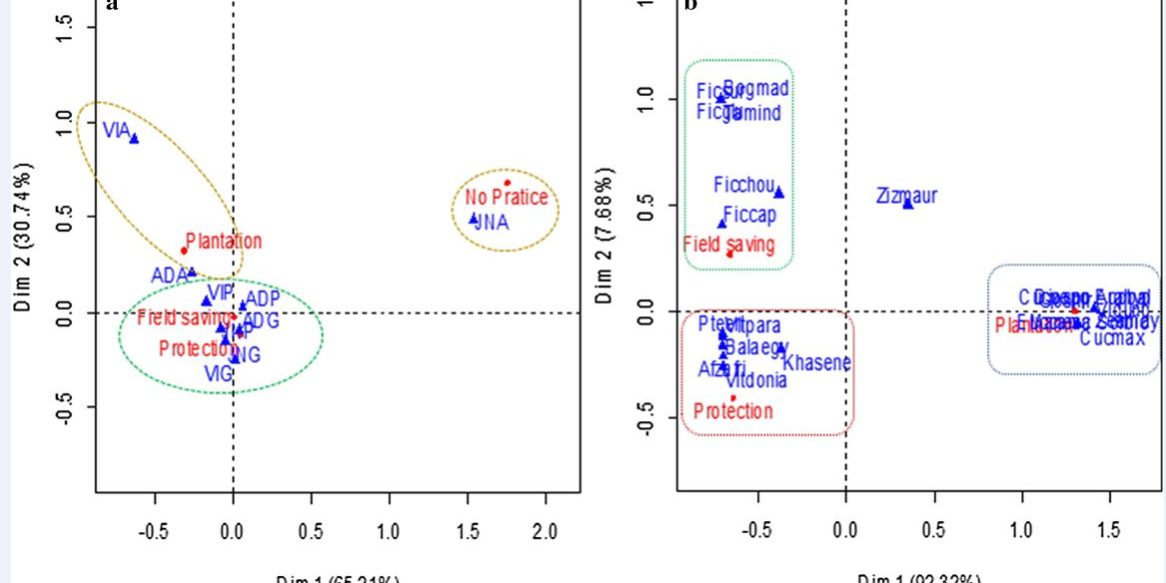 Benin has a high-value plant resources among which galactogenic plants are neglected. This paper aimed at assessing the diversity and indigenous practices associated with in situ conservation of galactogenic plants in the agro-ecological areas of Benin. An ethnobotanical study was carried out involving 310 informants in five sociolinguistic groups. The relative frequency of citation and fidelity index were used to assess the galactogenic value of each species. A principal component analysis and correspondence analysis were performed respectively to depict the relationships between the use of galactogenic plants and the sociolinguistic groups and appreciate the relationships between sociolinguistic groups and local practices for in situ conservation of galactogenic plants. A total of 69 galactogenic species belonging to 57 genera and 25 families were identified. Results also showed that predominant species were Fabaceae (18.8%), Poaceae (11.6%), Euphorbiaceae (10.1%), Caesalpiniaceae, Combretaceae and Apocynaceae (7.2%). The most represented genera were Euphorbia (5.9%) and Ficus (4.5%). According to the informants, Afzelia africana Sm. ex Pers., Euphorbia balsamifera Aiton, Bobgunnia madagascariensis (Desv.) J.H.Kirkbr. & Wiersema, Vigna unguiculata  (L.) Walp. and Arachis hypogaea  L. are the most effective galactogenic species for milk production with cow. Knowledge about galactogenic plants varied significantly across sociolinguistic groups, but not across agro-ecological zones and socio-professional profiles. Results also indicated that informants had poor knowledge of phenological time axis of plant species, including A. africana, Pterocarpus erinaceus  Poir. and Khaya senegalensis (Desr.) A. Juss. Local in situ conservation practices identified were protection of seedlings, preservation of the species in the fields and habitation, and plantation. Phenological studies of the most important galactogenic species are necessary to define appropriate strategies for their rational use and conservation.