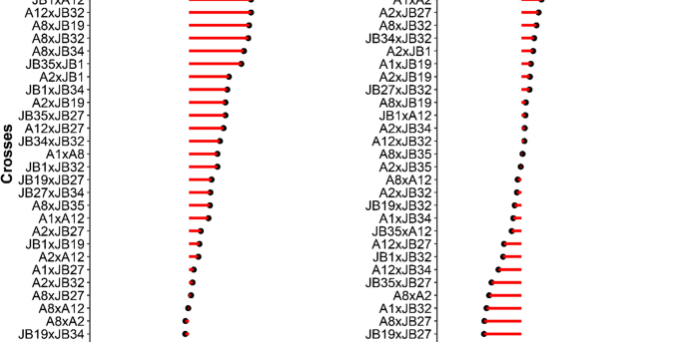 Knowledge of combining ability and mode of inheritance is important in devising strategies to breed compatible and high yielding plant varieties. This study determined combining ability and understood the mode of inheritance of sexual compatibility in Cola nitida, a crop in which incompatibility was reported. 10 × 10 complete diallel mating design was used to cross ten (10) elite clones of kola. Data collected included percentage pod set and nut traits of the various crosses. Percentage pod set differed significantly among crosses (p < 0.001). The percentage compatibility of the self-pollinated crosses ranged from 7.16 to 39.6% as compared to 20.0% to 87.35% for the cross-pollinated crosses. Crosses between white colour nut genotypes expressed more successful pod set (> 80% pod set) as compared to crosses between red and pink colour nut genotypes. Both additive and non-additive gene effects were significant (p < 0.001) for sexual compatibility in kola. However, the non-additive genetic variance was larger than the additive genetic variance for this trait. GCA estimates for genotypes A1 and JB1 were significant and positive for sexual compatibility. These genotypes are considered excellent combiners for sexual compatibility or pod set and could be used as pollinizers or pollen donors in kola orchards. Top crosses exhibiting highly significant and positive SCA for sexual compatibility included JB27×JB32, JB19×JB32, JB35×JB19, A1×JB34, JB35×A12 (direct crosses) and JB1×JB27, A1×JB35, A12×JB19, A1×A8, A1×JB35 (reciprocal crosses). The narrow and broad sense heritability estimated for pod set were 0.17 and 0.57, respectively. The correlation coefficients between pod set and the number of nuts per pod, pod weight and nut weight were significant (p < 0.05) and positive. Although the red nut colour is dominant over white and pink nut colours, it was fewer for some crosses compared to the number of white and pink nuts. This indicated the potential involvement of epigenetic factors in the inheritance of nut colour in kola.