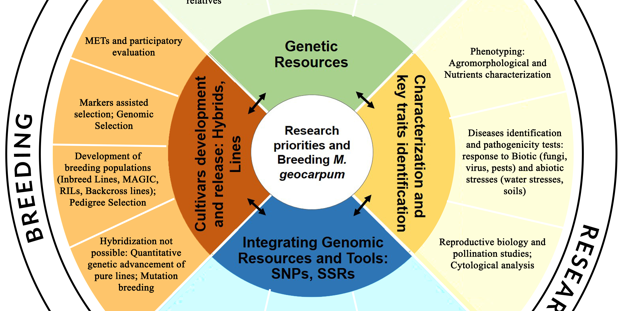 Kersting’s groundnut [Macrotyloma geocarpum (Harms.) Maréchal and Baudet], Fabaceae, is an important source of protein and essential amino acids. As a grain legume species, it also contributes to improving soil fertility through symbiotic nitrogen fixation. However, the crop is characterized by a relatively low yield (≤500 kg/ha), and limited progress has been made so far, toward the development of high-yielding cultivars that can enhance and sustain its productivity. Recently, there was an increased interest in alleviating the burdens related to Kersting’s groundnut (KG) cultivation through the development of improved varieties. Preliminary investigations assembled germplasms from various producing countries. In-depth ethnobotanical studies and insightful investigation on the reproductive biology of the species were undertaken alongside morphological, biochemical, and molecular characterizations. Those studies revealed a narrow genetic base for KG. In addition, the self-pollinating nature of its flowers prevents cross-hybridization and represents a major barrier limiting the broadening of the genetic basis. Therefore, the development of a research pipeline to address the bottlenecks specific to KG is a prerequisite for the successful expansion of the crop. In this paper, we offer an overview of the current state of research on KG and pinpoint the knowledge gaps; we defined and discussed the main steps of breeding for KG’ cultivars development; this included (i) developing an integrated genebank, inclusive germplasm, and seed system management; (ii) assessing end-users preferences and possibility for industrial exploitation of the crop; (iii) identifying biotic and abiotic stressors and the genetic control of responsive traits to those factors; (iv) overcoming the cross pollination challenges in KG to propel the development of hybrids; (v) developing new approaches to create variability and setting adequate cultivars and breeding approaches; (vi) karyotyping and draft genome analysis to accelerate cultivars development and increase genetic gains; and (vii) evaluating the adaptability and stability of cultivars across various ecological regions.